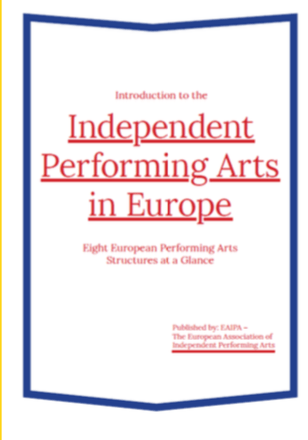 The independent performing arts communities in Europe are cont­inuously growing ever closer together. International cooperation is no longer a rare occurrence; many groups and collectives are inter­national themselves and the exchange facilitated by productions at international festivals or the professional exchanges between artists at conferences, conventions and networking events bring independent theater makers from a wide variety of European countries closer together. Furthermore, Europe’s performing arts communities unite in the exploration of a field for experimentation located beyond the traditional boundaries between audience and artist, between pri­vate and political, between the everyday and the “high culture” as well as beyond individual artistic genres. They challenge, negotiate, change and interact with the social conditions of their immediate and larger surroundings.

In some European countries representation structures have matured over the course of decades, as has the consistent dialogue between artists, policy makers and administrators to improve the shortco­mings in working conditions of the field. Some other countries lack this entirely. Sufficiently financed funding systems cannot be found anywhere in Europe. To this day, there are European countries in which independent performing arts are produced nearly exclusively out of individual initiative with close to no funding, with no social safety net and with no official recognition from the state. In some countries, there is a struggle for political recognition; in others, there is a struggle to create an active interest group to increase the endowment of the funding systems. Even in comparatively well-fun­ded countries, only a few members of the community are able to finance their artistic work in such a manner that their artistic goals can be realized without making compromises while at the same time maintaining minimum standards with regard to the payment of and provision of social safeguards for the artists involved. Further adding to the sector’s precariousness is the low degree of planning security and short-term timeframes, a lack of protection caused by a lack of social and labor law norms and difficulties in securing a livelihood as a result of a low level of income.

An adequate solution to those problems is missing all throughout Europe. At the same time those shortcomings and common problems are a motivation for solidary networking within Europe‘s indepen­dent performing arts communities and for this research. In order to address the needs for improved terms and conditions within the field, EAIPA – The European Association of Independent Performing Arts – was founded at the Berlin Performing Arts Festival in June 2018, knowing that the international exchange of independent dance and theater makers provides the opportunity to learn from one ano­ther and to create synergies in order to jointly work together to call for progressive changes in the financial and sociopolitical conditions within the independent performing arts communities all throughout the continent.