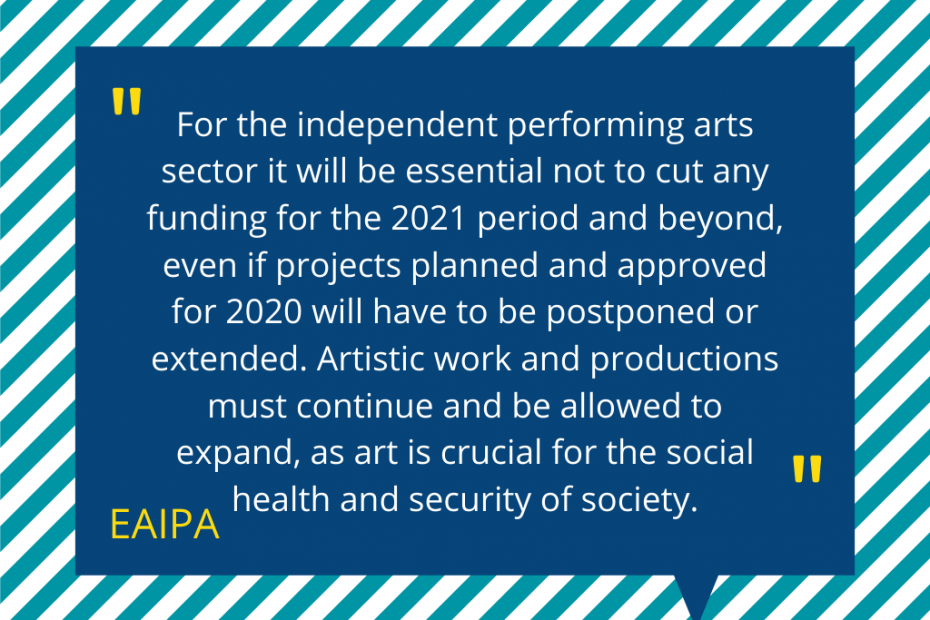 In reply to the statement made by the European Parliament Committee on Culture and Education regarding the current budget proposal, which will include a dramatic cut in funding for the cultural, creative and media sector compared to the previous proposal – we would like to offer our take on the situation and a list of specific recommendations. The European Commission’s objective must be to secure and increase the budget for art, culture and media by a sensible amount to ensure a viable future for the sector.

EAIPA operates at B2B level, its members being interest groups or representatives of the individual member countries, which in turn represent the actors from the Independent Performing Arts field. Therefore, EAIPA represents people, companies and theatres working in Europe’s independent Performing Arts sector, and it responds to Europe’s cultural policy making by collecting up-to-date information about the field, initiating new policy proposals and by raising visibility for the needs and achievements of the sector.

After comparing the national and international effects of the current COVID-19 governmental measures implemented within the artistic sector, the EAIPA association needs to express deep concerns about the situation of the independent performing arts sector.

The independent performing arts sector is an important part of the national and European cultural landscape, which continually produces and develops relevant contemporary art forms and content. This sector is a strong advocate of cultural diversity and represents one of the key aspects of our societal life. Further encouraging and nourishing this diversity also means to reinforce a sense of belonging to a united Europe – as outlined by the European Commission. Thus, sufficient funding for the sector should be a priority on the EU’s political agenda as well as at the respective national levels.

A unified representation of the independent performing arts sector was initiated by artists in the early 70s; international and decentralised from the very beginning. Since then, the focus has been on developing alternative ways of working and producing, on democratic and socially sustainable working methods, on research into new aesthetics, and on issues and cultural needs of minorities to open up access to cultural participation. All of these issues were up until then not covered by official state theatre organisations. From very early on, the independent performing arts sector has been a civil society project, a complementary movement to the official state organisations and a freelance project – self-organised, self-commissioned and self-committed.

The independent performing arts sector has in some European countries, such as Germany, already been recognised as the ’second pillar of culture‘, according to its impact and figures. Today, the independent performing arts sector has become an important ‚marketplace‘ for emerging, young and skilled artists. It functions as a resource for all performing art enterprises. The independent sector needs to be protected, as it is not only a laboratory for progressive artistic work, where new methods and new cultural fields are continually being developed, but it is also a great research sector for the future development of a participatory and socially sustainable culture.

Ever since the COVID-19 crisis has taken hold of our lives, we have witnessed the shortcomings, fragility and precariousness of our sector. People working in this sector do not have enough savings to come through this crisis. Many of them live from hand to mouth, relying on the income generated by every single performance and project. Within only a few weeks, this income basis has evaporated and has made the structural instability of the sector even more apparent.

Taking this into account, we have identified the most important issues that need to be addressed right now. In the long run, however, it is necessary that the entire sector requires support to become more stable and sustainable, and the focus of funding schemes should be directed at the individual artists as well as at the supporting production and presentation structures. In consequence, the strong presence of art and artistic works will be felt throughout society and reach ever more people. Easy access to artistic works and processes will stimulate the participation of audiences and will inspire them to take a greater interest in a diverse variety of formats, methods and artistic ideas.

EAIPA’s platform offers the opportunity to start a dialogue with all responsible parties and to share experiences, both positive and negative, in order to safeguard the performing arts in the long run.

Let us re-establish a dialogue to make the independent performing arts sustainable throughout the crisis and beyond!