Documentation Conference: WALK THE LINE – FAIRNESS FOR THE INDEPENDENT PERFORMING ARTS IN EUROPE 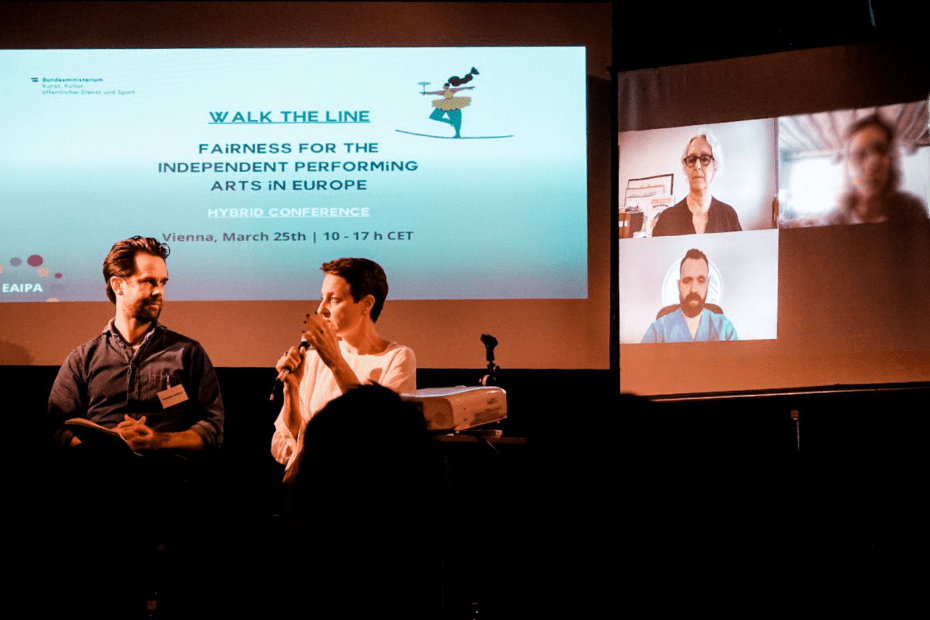 On March 25th 2022, the European Association of Independent Performing Arts hosted its first hybrid conference on the subject of fairness processes in the European independent performing arts. With a number of international guest speakers and representatives from various European associations, the presentations and discussions focused on different best-practice models and types of fairness processes, ranging from minimum honorarium fees to fairness codices and the question of the legal status of the artist. But in view of current political conflicts in Europe, debates were also concerned with what artists can say about the political support and appreciation of democratic and European values in their respective countries.

After a warm welcome and introduction by EAIPA president Ulrike Kuner the focus quickly shifted to one of the most urgent issues: the critical situation of artists in the war-torn streets of Ukraine. A video message from the Pro-English Theatre in Kyiv gave an idea of the challenges the Ukrainian people face in view of the unprovoked Russian attack on this sovereign European country. However, this was not the only time conference attendees were presented with accounts of authoritarian overreach: The section titled FAIR POLITICS featured representatives from three European countries (Hungary, Slovenia and Belarus) in which the freedom and support for independent artistic endeavours is currently under siege: Anikó Racz reported how the Orbán regime in Hungary actively seeks to replace key figures in the art world to rid itself of dissident voices. Inga Remeta illustrated how the significant cuts in funding for the Slovenian arts sector have had a devastating impact on the survival of the national independent performing arts scene. And the video message by the Theatre Community Belarus and a conversation with one of its members, Polina Dobrovolskaya, via phone call drew a clear picture of artistic life under censorship and political persecution by the authoritarian regime of president Lukashenko.

These morning presentations were complemented by two major presentations by EAIPA research lead Thomas F. Eder and Austrian Federal Ministry representative Brigitte Winkler-Komar. In his presentation, Thomas F. Eder explained how the continued structuralisation and institutionalisation of the European independent performing arts has helped amplify and promote the needs and status of the field nationally and internationally. However, despite high education levels and cross-disciplinary practices across the sector, Eder still had to point to the statistical evidence for the sector’s ongoing reliance on one of its largest subsidies: unpaid labour – since 2 out of 3 working in the European independent performing arts still earn up to or more than half their income from other activities. Additionally, the figures comparing social security schemes also stressed the disparity in the status and acknowledgement of the independent performing arts between different European regions, with a pronounced discrepancy along the North-West and South-East axis. Meanwhile, Brigitte Winkler-Komar, head of the Department for Music and Performing Arts at the Austrian Federal Ministry of Arts and Culture, gave a status update on the Austrian fairness codex and the additional funding provided by the Austrian Federal Ministry for the broad implementation of the Fair Pay scheme.

After the lunch break, the sections FAIR PAY and FAIR STRUCTURES emphasised how debates surrounding Fair Pay schemes also need to be scrutinized with regard to their underlying organisational and bureaucratic structures – but also by looking at the difference between keywords such as ‘fair’ and ‘minimum’.

For the section FAIR PAY, EAIPA representative Esther Baio gave a historical and factual account of the different models concerning minimum honorarium fees in Germany, Austria and Switzerland. She highlighted that any implementation of honorarium recommendations for publicly funded art projects – while first applied and based on the success stories in major cities and capitals like Berlin and Vienna – has always only ever been realised thanks to the political advocacy work of regional professional networks and national associations. However, her presentation also illustrated the stark differences between individual countries: Switzerland’s recommendations, for example, are based on minimum wage agreements and only apply to the employed, while Germany and Austria’s are based on sector-specific collective bargaining agreements and take into account the self-employed. Additionally, Lena Gustafsson, managing director of EIAPA’s Swedish partner association Teatercentrum, talked in more detail about the collective agreement helmed by Teatercentrum’s 100+ independent performing arts companies, which among other things also includes recommended rates for copyright, and how it has influenced other public arts funding in Sweden. Orri Huginn Àgústsson, chairman of the Icelandic association of independent theatre, also spoke on the subject of minimum fee recommendations in his country and their compatibility with the current national funding structure that comprises the Performance Art Fund and official ‘artist salaries’ – salaries that are currently below the living wage and 50% lower compared to artist fees at large cultural institutions, such as the Icelandic National Theatre. The discussion afterwards also shed light on other parts of Europe, with additional panel guests Nina Mariel Kohler from the Swiss partner association t-punkt, Czech representative Kryštof Koláček and Vienna-based artist Alexander Gottfarb joining the conversation.

The FAIR STRUCTURES section was headed by two presentations that once again considered the nature of bureaucratic structures and government policies: Cilgia Gadola, a representative from the Bundesverband Freie Darstellende Künste in Germany and the lead on the research project ‘Systemcheck’, talked about how their ministry-backed project analyses self-employed and hybrid working arrangements in the performing arts sector to help optimise socio-political instruments and rethink current employment models. Meanwhile, the first half of Esther Baio‘s extensive presentation focused on the different social security schemes for self-employed artists in Germany, Austria and Slovenia. Despite their almost 40-year legacy in Germany and Slovenia, Esther Baio stressed that pension and unemployment benefits for insured artists are still below the poverty threshold, while the ‘artist’ also remains to be a contended term which continuously fails to acknowledge non-artistic professions within the arts field. For the latter half of her presentation, she then talked about the issue of intermittency – when lack of a continuous employment status poses a risk to individual eligibility for social security – and subsequent mitigation efforts in Sweden, Portugal, Italy and Switzerland. It became clear that across all countries the general unemployment systems are poorly adapted to the unique working conditions of freelance artists. The discussion afterwards also featured guests from the aforementioned nations, such as Italian representative Davide D’Antonio and coordinator for the Lisbon Municipal Directorate of Culture Mafalda Sebastião.

During the afternoon, the short presentations about newly built structures in predominantly Eastern European regions gave cause for hope, as the increasing institutionalisation indicates the emergence of new performing arts networks and professional bodies. The new artistic director of the soon-to-be-opened Performing Arts Centre Iceland, Fridrik Fridrikson, presented his vision of an institution that aims to raise the international visibility of the Icelandic independent performing arts scene. Stefán Prohorov, chairman of the Bulgarian association of independent performing arts, talked about the reinvention of the arts centre Toplozentrala in Sofia. Only Elmaze Nura‘s account of the performing arts scene in Kosovo demonstrated the many deficiencies in Europe’s arts agenda, as the former general director of the National Theatre of Kosovo and professor at the Faculty of Arts at Hasan Prishtina University explained how the development of the independent performing arts scene in Kosovo has been lagging behind due to lack of structural support and specialized networks and institutions.

In the early evening, the final three presentations accentuated the fact that every artistic process is also a social process, which makes it fertile ground for misunderstandings, undeclared hierarchies, dependencies or hidden power structures. Consequently, several initiatives have started to compile practical guidelines for a better and more ethical co-working environment. To this effect, Diana Rojas-Feile talked about the FAIRSPEC initiative in Switzerland, which has helped compile an internationally applicable codex that aims to cover different aspects of communication and collaboration and is committed to complying with remuneration guidelines issued by professional associations, while Axel Tangerding gave a brief overview of the existing fairness codex in the Netherlands, which has also recently served as a blueprint for the Austrian Fairness Codex. Finally, Elena Politseva, head of policy and research at the International Network for Contemporary Performing Arts (IETM), gave a short introduction to the ‘Perform Europe’ project, which aims to rethink cross-border performing arts presentation in a more inclusive, sustainable and balanced way.

With many enlightening and stimulating presentations, this conference ultimately underlined the vibrancy and diversity of Europe’s independent performing arts scene. As speakers from the shores of Iceland and Portugal met with representatives from Bulgaria and Kosovo, it was easy to identify shared interests and find common ground. But, as presenter Christian Keller introduced additional guests on stage at Theatercafé Spektakel in Vienna, the debates also showed that support and funding for the independent performing arts differ immensely across Europe. The silver lining, however, remained to be the mutual interest of all involved to work together on finding solutions and sharing knowledge. As such, the project EAIPA is sure to grow, evolve and build on the work of its member associations, so that many more networks and professional bodies from other European countries can join the fight to create a fair, better and sustainable future for the European independent performing arts.

3) FAIR POLITICS: the actual situation of ipa in Europe

5) FAIR PAY in Europe: Round Table