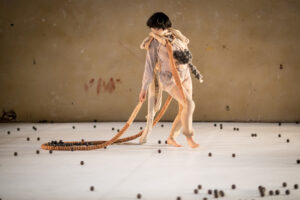 In the recent decade, Czech independent theatre has become an immense and complex organism, conspicuous by its diversity of artistic approaches, organisational systems and multi-generational nature. Mostly relying on state, regional and municipal funding, independent theatrical production thrives in the capital, while there is also a vibrant scene in Brno and smaller cultural centres like Plzeň, Olomouc and Ostrava. In addition, people who live in towns off the cultural grid occasionally have the chance of seeing independent productions. This considerable theatrical output is possible even though less than one per cent of the state budget is allocated to the Ministry of Culture. Over the last thirty years, there have been urgent and frequent calls for a more generous cultural budget. Yet, while politicians are not pampering the Czech independent theatre scene, the general impression seems to be one of dizzying abundance.