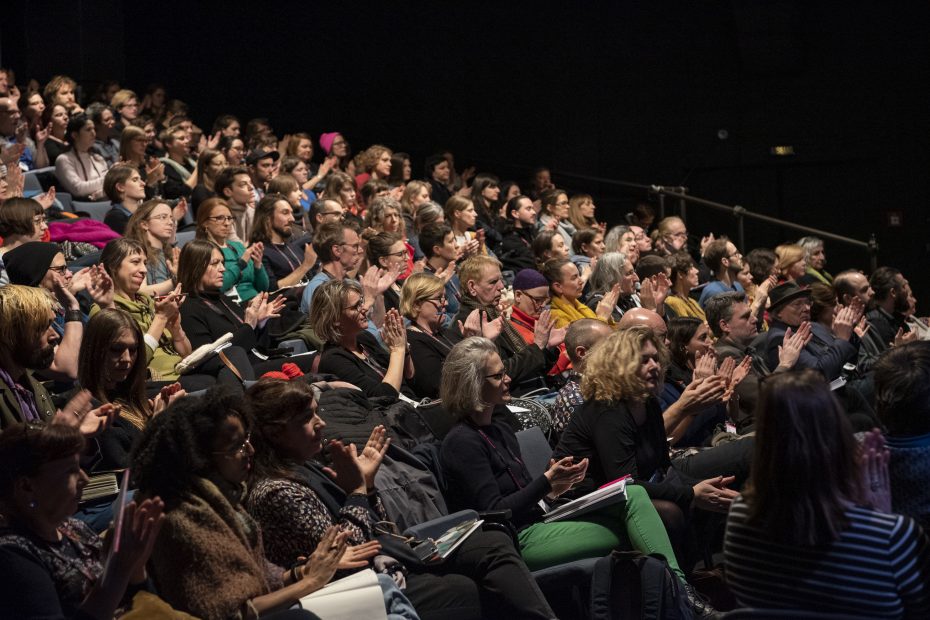 The federal congress UTOPIA.NOW hosted by the Bundesverband freie darstellende Künste in Berlin at the beginning of this year was a great opportunity for EAIPA members to come together for another working meeting and to take essential organisational steps for the 2020 annual general assembly.
Cultural workers, creatives, politicians and representatives of cultural organisations from all over Europe met at HAU – Hebbel am Ufer to form new communication networks within the independent scene and to discuss current affairs, utopian ideas and visions of the future. A respectful and original exchange of ideas – a great source of inspiration!

More than 60 events, 89 speakers and 600 participants discussed among other things the freedom of art, the social situation of artists as well as issues of diversity, sustainability and – last but not least – solidarity. Specific points of discussion were dealing with experiences of the minimum hour fee in Berlin since its implementation in 2016 and with ways of how to further develop this tool. The most interesting points of discussion dealt with questions of power and arbitration structures in theatres, collectives and companies. This will certainly become more relevant over time, with many new ideas that are worth being included in the discussion.

EAIPA President Ulrike Kuner invited Sabine Verheyen (chair of the committee on culture and education), Janina Benduski (chair of the German Association of Independent Performing Arts board) and Frank Heuel (artistic director of the Fringe Ensemble from Frankfurt/Main) to join her in a conversation on “Where is European Cultural Policy headed?”. Key issues included current cultural policy action taken by the EU as well as the existing information and communication channels of the culture and education committee. The question ‘how – and where – do the EU parliamentarians and politicians get their information on the performing arts sector’ was of particular interest. Sabine Verheyen pointed out that politicians mostly rely on the information the associations and unions provide. Communication with the respective national representatives in the EU parliament and with the responsible people on EC level therefore plays a significant part in policy making (i.e. commissioner Mariya Gabriel, representatives from the culture unit and the EACEA – European Agency for Culture, Education, Audiovisual).

This is currently even more relevant since no final decision on the EU budget has been made, with no agreement between the four remaining countries (Austria, Sweden, The Netherlands, Germany). For this reason, it is still important to raise awareness of the needs and demands of the independent performing arts scene in Europe in order to secure a sufficient and adequate budget for culture. Hannes Heide and Alexander Bernhuber are the respective EU parliamentarians from Austria closely working with the culture and education committee.

In addition to the events at the Federal Congress, EAIPA managed to organise some very inspiring working meetings, aiming to perfect the formats and content for the ongoing development process of a Creative Europe Network App. This included an exciting two-hour workshop on the future Creative Europe programme with Barbara Gessler, head of the culture unit at the European Commission.

Another key aspect of EAIPA’s agenda is a common definition of a unified Europe. As this definition lies at the heart of the planned network app, the question of what a European network can or should be needs answering. Other points of discussion included concrete steps for future activities and content, i.e. new formats for meetings, conferences, and the design and structure of our planned research study of all the independent performing art scenes in the different European countries. Thomas F. Eder, principal investigator, briefly presented his concept and introduced the cooperating universities.

We are also happy to announce that more and more associations across Europe are keen to join EAIPA. At the General Assembly on January 19, 2020, we were able to welcome two new members to the association: the Akadémia divadelných tvorcov (Slovakia) and the GUILD Association of Ukrainian Independent Theatres. We look forward to a year of productive cooperation and to welcoming even more members in 2020!